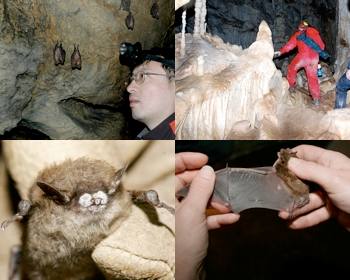 This piece from the December 2010 issue of National Geographic explores this troubling situation, and it begins with a description of the U.S. Geological Survey's National Wildlife Health Center in Madison, Wisconsin. This secure facility contains habitats for prairie dogs, zebra finches, and tiny brown bats. All of these animals are part of various scientific experiments on wildlife health, and David S. Blehert, a microbiologist at the Wildlife Health Center, is looking at how this fungus is affecting the bats.

So far, Blehert and others in the field have observed that this new fungus (and White-Nose Syndrome, the disease it causes) is the first one to target a hibernating animal. The fungus appears to be new to North America, and its presence was first noted at a cave west of Albany, New York in February 2006. A team of experts from New York's Department of Environmental Conservation made an inspection of a nearby cave and found thousands of dead bats . In the past few years, biologists estimate that over a million bats of various species have died from this mysterious fungus throughout the U.S., with populations at some sites eliminated.

Scientists have determined that what makes the fungus lethal is that it strikes hibernating bats. Usually, fungi don't cause serious problems in warm-blooded creatures, but since the physiology of hibernation in mammals includes the lowering of body temperature and other metrics of metabolism, the animals become quite vulnerable. Scientists remain interested in locating the origins of the fungus, but that has proved difficult. They are puzzled as to why this fungal infection develops into the dreaded White-Nose Syndrome (WNS). This is when the fungus covers the snout fur of the bat and causes corrosive white lesions on the wings and early arousal from hibernation. There are many unanswered questions about this fungus, and it is something that curious parties will want to keep tabs on over the coming months and years.

Found below is a list of useful resources that will illuminate and enhance understanding of the topics found within this article. The first link will take visitors to a great site from the Wildlife Disease Information Node from the National Biological Information Infrastructure that includes interactive maps of animal diseases around the world, complete with numerous filters and extra features. The second link leads to the homepage of the Bat Conservation Trust, where visitors will find a trove of materials on all things bats, White-Nose Syndrome, and much more. Moving along, the third link will take interested parties to an excellent website from the U.S. Fish and Wildlife Service, which is dedicated to collecting and disseminating information about White Nose Syndrome. The fourth link leads to the University of Bristol's Bat Ecology and Bioacoustics Lab where visitors will find a useful set of tools to learn about bats, including their Interactive Biosonar site, which teaches about seeing with sound. The fifth link provides a great set of instructional materials on the processes animals use to adapt to the changing seasons, including migrations and hibernations. Finally, the last link leads to the homepage of the Wildlife Conservation Research Unit at Oxford University. Here visitors can learn about wildlife conservation efforts around the world and read relevant reports.

1. Global Wildlife Disease News Map
How does one populate an interactive map of wildlife disease? Well, the good people at the Wildlife Disease Information Node (WDIN) have done just that by combing through RSS alerts, science sites, and blogs to create this fascinating and tremendously useful resource for population biologists and others who might be interested in such matters. On the map, visitors can toggle map filters that include "Wildlife Topic", "Human/Wildlife Topic", "Domestic/Wildlife Topic", and "Disease Type". Visitors can also elect to zoom in and out across the map in order to look for items of interest. Moving on, the site also has a "Browse Map Articles" section that allows visitors to scan through the full text of recent items added to the map. Finally, visitors can also view the map as a satellite image, or as a hybrid if they wish.

2. Bat Conservation Trust
According to the folks at the Bat Conservation Trust (BCT) in the UK, "Bats are amazing animals, and an important part of our natural environment." In the UK there are 18 different species of bats, and all of them are protected by law due to rapidly decreasing populations. To start, visitors should visit the "About Bats" section found on the toolbar near the top of the page. Here, they will find more information about bats, threats to bats, bats and the law, bats and rabies, and the White-Nose Syndrome plaguing bat populations. Back on the homepage visitors should also check out the "News, Training, & Events" and "Publications & Resources". In addition, you can follow the BCT on Twitter, Facebook, and through their blog.

3. U.S. Fish and Wildlife: White Nose Syndrome in Bats
This website provided by the U.S. Fish and Wildlife Service is dedicated to White-Nose Syndrome (WNS). In February 2006 some 40 miles west of Albany, N.Y., a caver photographed hibernating bats with an unusual white substance on their muzzles. He noticed several dead bats. The following winter, bats behaving erratically, bats with white noses, and a few hundred dead bats in several caves came to the attention of New York Department of Environmental Conservation biologists, who documented White-Nose Syndrome in January 2007. More than a million hibernating bats have died since. Biologists with state and federal agencies and organizations across the country are still trying to find the answer to this deadly mystery. On the site visitors will find current news on WNS, photos, research and monitoring, audio and video, and information on the WNS national plan. In addition, you can monitor the situation by following them on Twitter and Facebook and by reading their blog.

4. University of Bristol: Bat Ecology and Bioacoustics Lab
The Bat Ecology and Bioacoustics Lab at the University of Bristol, conducts research on the "ecology, behavior, and conservation biology of bats." On the site, visitors can view their publications, several online guides to bats, and a useful list of links to all things bat. Educators will appreciate the "Interactive biosonar site," developed to teach "seeing with sound." The interactive includes three chapters of games, exercises, and activities to help students learn more about biosonar. In addition, in the "Downloads" area, visitors can find the recordings of the calls of 15 species of bats found in Britain. The calls are time-expanded recordings so that they are detectable to the human ear. To download the files, visitors must open them with a sound analysis program such as Gram (program link provided). Otherwise, a selection of calls for each species may be heard using any program that recognizes WAV files. The site also provides a text file describing in detail how the echolocation calls were recorded.

5. JourneyNorth: A Global Study of Wildlife Migration
Not many websites bring together whooping cranes, gray whales, and bald eagles, but this educational resource from Annenberg Media manages to do just that. The site is designed to help students learn more about the global study of wildlife migration and seasonal change by drawing on their own observations. On the homepage, visitors can click on a diverse set of animals to learn more about their migratory patterns. Moving on down the site, visitors can also contribute their own recent sightings and take a look at data that's been submitted by other users. The "Maps" section is a great way to get a visual overview of the most recent sightings and there is a great area for teachers that includes instructional activities and classroom lessons.

6. Wildlife Conservation Research Unit
Oxford University has a very important website dedicated to its Wildlife Conservation Research Unit (WildCRU), that hopes to solve the "conflict between peoples' futures and wildlife conservation." There are several themes on the website, all of which can be found on the left hand menu. Visitors will find the following topics to explore: "Endangered Species", "Invasives", "Land Use & Biodiversity", "Fundamental Biology", "Wildlife Diseases", and "Wildlife as a Resource". The "Publications" link at the top right side of the page contains books, papers, reports, and theses available to read online or find in a physical library. A multitude of animal issues are discussed in the documents here, including a paper called "The World Can't Have Wild Tigers and Eat Them, Too" and a report on the "State of Britain's Mammals 2008". The "Research" link near the top of the page includes the dozens of research projects WildCRU is involved in, such as "Badger Genetic Research", "Transfrontier Conservation of Andean Cats" and "Towards Reducing the Total Environmental Impacts of Agriculture."