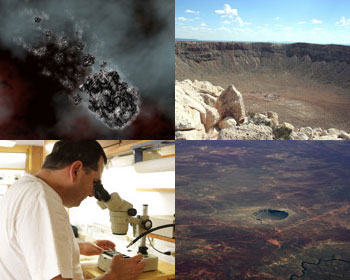 When something falls out of the sky, what happens? It is a question that has puzzled scientists for decades, and while many objects strike the earth's surface (thereby becoming a meteorite), three-quarters of them touch down in open water. In 2007, a meteorite landed in Carancas, Peru and the landing presented some rather unique opportunities for geologists.

In the July 2008 issue of Geotimes, scientists Lionel E. Jackson Jr., Peter Brown, Jay Melosh and Dolores Hill offered their own account of this meteorite strike in Peru, the crater it created, and the ensuing buzz of scientific activity. It all started on the morning of September 15, 2007 when a bright fireball moved across the sky over Lake Titicaca. Upon final impact a few seconds later, eyewitnesses noted that the meteorite had left a 13.5 meter wide crater, and that fragments of the meteorite landed as far away as 200 meters.

The meteorite presented a rather compelling and fairly unique situation for scientists all over the world. It was the chance to study fragments of a fresh impact crater and to take a close look at a chondrite. A chondrite is a stony meteorite that generally breaks up in the atmosphere; the largest intact chondrite to reach the Earth's surface was during the Jilin, China meteorite shower in 1976.

The scientists moved quickly and began working with Peru's geological survey team on examining the meteorite. One of the survey members, Luisa Macedo, was able to cut the impact samples into thin, polished sections which under a microscope revealed that the meteorite was in fact a chondrite. The Lunar and Planetary Laboratory at the University of Arizona later confirmed this finding, and scientists have also been able to determine the meteorite's velocity, mass, and impact angle.

One puzzle remained as scientists continued to research the meteorite and its impact site. Why did this object create a round crater? This was a particularly vexing question, as the meteorite had entered the atmosphere at an acute angle. In most cases an acute impact angle would create an elliptically-shaped crater, but that was not the case here. Scientists eventually drew on information from other fields to determine that at such high speeds the resulting crater is created by a massive explosion. With that in mind, such variables as angle of approach and size cease to be of much importance in determining the final crater form.

Found below is a list of useful resources that will illuminate and enhance understanding of the topics found within this article. The first three links are broadly related to the world of meteorites, and the second group is related to geology. The first link will take interested parties to Washington University's Lunar Meteorites website, which contains some basics on the world of meteorites, including answers to questions such as "How are lunar meteorites classified?" The second link leads to a NASA news commentary from David Morrison on evidence that suggests that a massive impact triggered the Permian-Triassic extinction. Moving on, the third link leads to the homepage of the Association of Lunar and Planetary Observers. This site also has some good information on meteorites, along with sections dedicated to Jupiter, Saturn, and a sample of minor planets. The fourth link leads to the OpenCourseWare page for an introductory geology course at MIT taught by Professor Lindy Elkins-Tanton. The site includes lecture notes, a syllabus, assignments, and other course materials. The fifth link leads to an interactive resource on the Earth's interior, created by the people at the Annenberg Media project. The last link leads to an excellent series of teaching activities related to structural geology created by a team at the earth sciences department at the University of Leeds. Overall, these resources should provide greater scope and help contextualize the ideas and concepts found within in the featured work. The list provides links to resource records in the Applied Math and Science Education Repository (http://amser.org/).

1. University of St. Louis: Lunar Meteorites
From the Department of Earth and Planetary Sciences at Washington University in St. Louis comes this very informational site about meteors. The opening page of the site would serve a novice meteorite researcher in her or his discovery about these rocks from outside of the earth — including information on how meteorites are named, where they come from, why they are important, etc. The site explains the difference between meteorites and meteoroids. Also of note is the List of Lunar Meteorites which opens up an up-to-date listing, "in approximate order of decreasing alumina concentration" of several meteorites found in the last twenty years.

2. Did an Impact Trigger the Permian-Triassic Extinction?
This resource, authored by David Morrison, contains the National Aeronautics and Space Administration's Astrobiology Institute news story on new evidence of a 251-million year-old impact crater off the western coast of Australia that may have caused the "Great Dying", the Permian-Triassic extinction event.

3. Association of Lunar and Planetary Observers
The Association of Lunar and Planetary Observer's web pages, an organization of amateur astronomers interested in observing solar system objects. The site features sections on youth programs, solar, lunar, eclipse, remote planets, comets, meteors, meteorite, transit, instruments, computing and guidelines for authors. More aspects of the page include a section for publications and an image archive.

4. MIT OpenCourseWare: Introduction to Geology
If you are having difficulty remembering the details of the Earth's geological structure or the nature of major minerals and rock types, you can consult this excellent introductory course offered as part of MIT's OpenCourseWare initiative. The materials are drawn from Professor Lindy Elkins-Tanton's Spring 2008 "Introduction to Geology" course, and they include a syllabus, a course calendar, readings, lecture notes, and assignments. The course is designed for undergraduates, though anyone can benefit from examining the materials. Visitors can make their way through lecture notes that cover metamorphic rocks, rock deformation, earthquakes, and the formation of continents. The site also contains some great handouts which cover time scales, New England geology, and oxygen isotopes. Finally, visitors can also send feedback about the course.
5. Interactives: Dynamic Earth
Conveying the dynamism of various geologic processes can be hard in the classroom or on the web, but this interactive feature from the Annenberg Media's Learner.org site does quite a fine job of introducing students to plate tectonics, plate boundaries, and such perennial favorites as earthquakes and volcanoes. In the "Earth's Structure" section, visitors can roll the mouse over such features as the crust, the mantle, and the outer core of the Earth to learn about each feature. Moving on, the "Plate Tectonics" area includes the "Continents Over Time" interactive feature which asks visitors to place images of the continents in the correct geologic order. Perhaps the most dynamic area of the site (with good reason) is the "Slip, Slide & Collide" area. Here visitors will learn about what happens at different types of plate boundaries through the use of colorful graphics and explanations that are easy to understand. Overall, the site is a great overview of some basic principles of geology, and one that can be used with students of different ages.
6. Teaching Resources in Structural Geology
To some, the terms folds, faults, and shear zones might suggest a type of elaborate and cutting-edge style of origami. Those in the know will think immediately of the field of structural geology, and this site is a fine resource for information within that area of geology. Rob Butler, Martin Casey, Geoff Lloyd, and Andrew McCaig, all of whom work in the School of Earth Sciences at the University of Leeds, created these teaching resources. Visitors can start their journey through the site by clicking on the "Basic Principles" section, which contains a nice overview of the patterns of rock organization and how geologists understand the history of rock patterns. The other sections of the site provide basic overviews of shear zones, fault patterns, minor structures, and strain. The site is rounded out by a few virtual field trips, which will be quite helpful for those who can't make it to the Himalayas or the fabled Western Gneiss region of Norway.