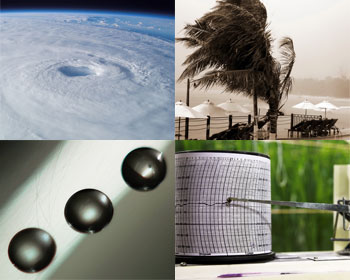 The idea that humans can modify the weather to bring rain, alter the routes of hurricanes, and other seemingly impossible tasks, is as old as human civilization itself. Throughout history, different groups have believed that these types of weather modifications could change the course of empire, affect agricultural production, or potentially save lives.

This article by Donovan Webster from Discover magazine takes a close look at some recent innovations and experiments in weather modification. The piece begins by discussing the recent cloud seeding work done by the North American Weather Consultants group in Utah. Cloud seeding is a technique that involves using silver iodide in order to allow tiny water droplets to coalesce until they are big enough to fall out of the sky. Webster goes on to discuss the increasing interest in such experiments as of late, especially as public policy groups and governments grow concerned in the wake of phenomena like the 2007 summer floods in Great Britain, the 2005 hurricane season, and other similar weather events.

Moving along, the article provides a brief history of weather modification from the time of Leonardo da Vinci's experiments using cannonballs to stop hail to more recent endeavors such as the U.S. military project "StormFury". This project's goal was to weaken hurricanes by seeding their upper reaches with silver iodide crystals that would increase the amount of ice swirling around in the storm. As the water became ice, it would release heat, and this heat would effectively widen the eye of the storm and subsequently decrease the strength of its winds.

The next section profiles the work of Richard Blair, who is the CEO of Barken Fog Ops, which is a fog-abatement company in Salt Lake City. Barken Fog Ops works to control and remove the cold fogs at Salt Lake City International airport. His work has been tremendously successful, even if it occasionally also creates snowstorms.

The piece concludes by offering commentary from experts at the University of Virginia and the Hebrew University of Jerusalem on the ideas and current work surrounding hurricane moderation. While most of the experts seem to agree that computer modeling programs indicate that some type of programs are theoretically feasible, there also remains the distinct possibility of a very real human threat: pending litigation if the weather modification program is (or is not) effective.

Found below is a list of useful resources that will illuminate and enhance understanding of the topics found within this article. The first link will take visitors to a neat site from HowStuffWorks that provides some background details about how China has been working on a variety of cloud seeding projects. The second link leads to a great site from the Oklahoma Weather Modification Program that is designed to help students initiate a debate on the controversy surrounding the issue of inducing or enhancing precipitation. Moving along, the third link leads to an exercise created by Chris Fox at Kennesaw State University designed to introduce students to the idea that human activities can alter the chemistry or gaseous composition of the atmosphere. The fourth link leads to an excellent online exhibit created by the American Museum of Natural History to provide interested parties with charts, photographs, and graphs that discuss climate change. The fifth link will whisk interested parties to the homepage of the National Hurricane Center. Here they can take advantage of hazardous weather updates, and also look up historical data and forecasts. The last link will take users to a NASA website which provides some fundamental information about how hurricanes form, intensify, and then weaken.

1. Can China Control the Weather?
Here, HowStuffWorks, explains cloud seeding and its environmental impacts within China. Author Jacob Silverman explains how the process occurs and the benefits and costs of this operation. The information is clearly explained and a gallery of images is also provided. This site should prove quite useful to anyone interested in cloud seeding and climate modification.

2. Cloud Physics: The Basics
This website from the Oklahoma Weather Modification Program encourages students to initiate a debate on the controversy surrounding the issue of inducing or enhancing precipitation. The exercise describes the two basic tenets of cloud seeding: the Static Phase Hypothesis and the Dynamic Phase Hypothesis. Also provided are links to a weather and climate glossary and further information about clouds and precipitation.

3. How Humans Change the Atmosphere [pdf]
This exercise, from the Environmental Science Activities for the 21st Century Project, is designed to introduce students to the idea that human activities can alter the chemistry or gaseous composition of the atmosphere, resulting in a variety of impacts on human health and the environment. Discussion topics include indoor pollution and local (point- or non-point source) pollution. Students will perform an activity in which they use an online resource from the Environmental Protection Agency (EPA) to research point-source polluters in the area where they live. They will identify facility names, addresses, and potential environmental concerns, as well as generate maps showing the locations of these sources. Students then answer questions about the information they uncover.

4. American Museum of Natural History: Climate Change
Climate change is at the forefront of international public policy these days, and this superb online exhibit on the subject will add to understanding of the issues and the science surrounding this area of concern. The in situ exhibit was organized by the American Museum of Natural History in New York, with the collaboration of the Abu Dhabi Authority for Culture & Heritage, Chicago's Field Museum, and a number of other institutions. On the site, visitors will find interactive features that mirror the in situ exhibits, complete with charts, informative text, photographs, and graphs. Some of the sections included here are "How Did We Get Here?", "Climate Change Today", and "Changing Land". Moving on, the "Climate Change Resources" area contains free resources that will help visitors learn more about the topics covered here, and there is even a cool activity that allows users to build their own terrarium to learn more about the greenhouse effect. The site is rounded out by their weblog, "Signs of Change".

5. National Hurricane Center
With the explicit mission of saving lives and improving economic efficiency by issuing the best watches, warnings, forecasts and analyses of hazardous tropical weather, this site features continuous watch on tropical cyclones from 15 May in the eastern Pacific and 1 June in the Atlantic through November 30. The Center issues forecasts, watches and warnings within text advisories and graphical products. On the left side of the homepage, visitors can find an abundance of information including: Hurricane History, Hurricane Awareness, Storm Info, and more. Interested visitors can also sign up for their email updates or follow them on Facebook.