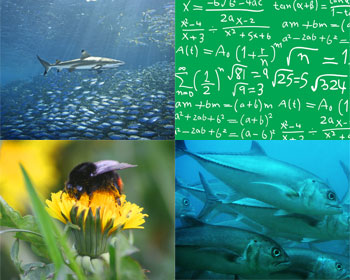 How do sharks hunt for and find their prey? Marine scientists and others have developed many theories on how this process works, and the question continues to receive a large amount of attention. This compelling article by Alexandra Witze from the July 3rd, 2010 edition of Science News examines new research on how sharks might use mathematical strategies to find their next meal.

The piece begins by discussing a new study that appeared in June 2010 in the magazine Nature. The study noted that sharks and other marine predators could be following "strict mathematical strategies" while making their way through the ocean. The suggested pattern that they follow is known as a Lévy walk. This unusual "walk" involves animals taking long forays in a particular direction and these forays have a distinct resemblance to different types of fractals when taken as a whole.

Most biologists once believed that animal foraging was dominated by random motion, however in 1996 a team of researchers observed that albatrosses made an occasional long flight that seemed distinctly like the Lévy walk. After this observation, biologists began to notice other animals engaging in the Lévy walk, including deer and bumblebees. After sometime, the original study from 1996 came under attack in the scientific community, and it was debunked as inherently flawed.

This new study by David Sims, a researcher at the Marine Biological Association of the United Kingdom in Plymouth, states that he and his colleagues have found the Lévy patterns and behaviors in at least 14 species, including marlin, tuna, and sharks. Currently, Sims and his colleagues are seeking additional evidence of Lévy behavior in lower marine animals such as octopuses. It remains interesting work, and it will be exciting to see how it advances in the coming years.

Found below is a list of useful resources that will illuminate and enhance understanding of the topics found within this article. The first link will take users to an informational website created by the Monterey Bay Aquarium. Focused on the world of the shark, the site includes instructional resources, videos, and information on different species of shark. The second link will take users to the Center for Ocean Sciences Education Excellence site, which provides a plethora of information on marine life. The third link whisks users away to a fascinating site created by Paul Bourke of the University of Western Australia, which presents some basic information on fractals. The fourth link leads interested parties to a very fun and interesting Flash-based fractal maker, courtesy of Daniel Gries and the Mathematical Association of America. Moving on, the fifth link leads to the Animal Diversity website, which features a database of species organized by common or scientific name. Each entry features additional information, including natural history, habitat details, and photographs. Finally, the last link leads to a beautiful website from National Geographic which explores the complex world on animal migrations, with a focus on army ants, an African elephants, the red crab, and of course, sharks.

1. Sharks: Myth and Mystery
The Monterey Bay Aquarium is well regarded for its many educational outreach activities and its fine exhibits, and this online exhibit on the world of sharks can be utilized by visitors of all ages. Visitors will want to begin by taking the opportunity to "Meet the Sharks". Here, visitors can learn about the individual species of shark by habitat and look through images and videos of the different sharks, from the Blacktip Reef shark to the Scalloped Hammerhead. Younger visitors will also want to take a look through the Shark Fun area where they can decorate a shark mask, create a shark totem pole, and print out shark "critter cards". There is also a section with information on how to stop shark population decline due to modern fishing practices.

2. Center for Ocean Sciences Education Excellence Southeast (COSEE-SE)
This is the Centers for Ocean Sciences Education Excellence (COSEE) center for ocean science integration and outreach in the southeastern U.S. The mission is to "spark and nurture collaborations among scientists and educators to advance ocean discovery and make known the vital role of the oceans in our lives." The site provides information for educators and scientists, upcoming news and events, and a "creature feature." In the "Educator's Niche" visitors will find professional development opportunities, educator resources, and much more. The site also features current research, monitoring, and management initiatives taking place in the area.

3. An Introduction to Fractals
This webpage is dedicated to all things fractals, and is organized and updated by Professor Paul Bourke of the University of Western Australia. Visitors will find all kinds of useful tools for discovering and learning about fractals including: Fractal forms found by using Google Earth, Natural Fractals in Grand Canyon National Park, Introduction to fractals, a gallery of fractals, and much, much more.
4. Flash Fractal Maker
While some may know fractals primarily from their use in abstract painting and African art, fractals are important elements within the world of mathematics. For those who seek to learn more about the construction of fractals and their uses, this very nice Flash-enabled feature from Daniel Gries at Merrimack College will definitely come in handy. This particular Flash applet draws fractals by means of a recursive algorithm, using a simple "generator" that users draw in the space that it is provided. Before using the application, users may wish read the overview offered online, and also take the time to read the instructions thoroughly.

5. Animal Diversity Web
The University of Michigan Museum of Zoology provides the searchable Animal Diversity Web database, with species accounts (images and text) of some of the world's mammals, birds, amphibians, reptiles, sharks, bony fishes, mollusks, arthropods and echinoderms. The database is searchable by common or scientific name. For each species account, information includes scientific and common name, classification (Phylum through Genus), and color photographs (many beauties). Some accounts supply additional information, such as geographic range, physical characteristics, natural history (food habits, reproduction, behavior, conservation, and habitat), other comments, and references. Although the list of species is by no means complete, these simple but effective accounts are interesting to read and will be helpful as supplemental resources in a biology, ecology, or statistics course.

6. Great Migrations: National Geographic
Animals of all shapes and sizes migrate, and this National Geographic website explores the story of a few notable migrations across the planet. Designed to complement their new television series of the same name, this site provides video clips from the programs, along with interactive profiles of the migrations, and behind-the-scenes footage. Visitors can also check out the "Meet the Filmmakers" section to learn about the production crew members and their work. The highlight of the site is the "3D Migration Globe" area. Here visitors can click on an animal of their choosing and watch its migration pattern unfold on a globe. The animals include an army ant, an African elephant, and the red crab. The site continues to add new materials, so it will be worth checking back in now and then to see what they have added.