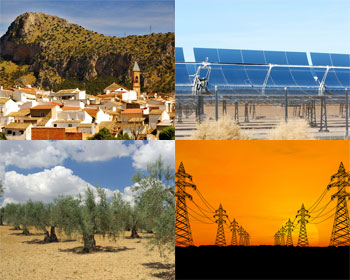 The quest for effective and large-scale solar power projects has intensified in the past several years, and recent developments in Spain are pointing the way forward. This article by Richard Covington appeared in the August 2010 issue of Smithsonian Magazine, and it documents the transformation of a renewable energy source once viewed as somewhat marginal.

The article begins by describing the Solúcar solar farm, which is located west of the city of Seville. At the farm, the engineers and workers are implementing new and creative technology designed to make the existing technology more efficient. One of the ways this is being done is through the use of concentrated solar power (CSP), which deploys huge banks of mirrors to focus radiation. The resulting heat drives steam turbines, which produce electricity.

All told, these CSP facilities will eventually generate 300 megawatts, enough to power all of metropolitan Seville. Of course, there are many days from November to March (usually about 80 or so), when the solar installation shuts down entirely due to overcast skies or rain. This is a fact of life acknowledged by Valerio Fernández, Solúcar's operations manager, who remarked, "If we are seeking to make solar power more efficient, there are better places than Seville."

The piece continues by exploring a relatively new innovation in solar power storage systems at the facility outside of Seville. Here the Solúcar company is working on their first CSP facility to use parabolic trough technology. This technology uses mirrors which resemble shallow troughs, and at their focal point is a transparent tube filled with synthetic oil. Sunlight will be directed to the tubes, and the heated oil will be used to boil water for turbine-driving steam.

Finally, the article concludes by noting that there are plans to develop similar solar power facilities in North Carolina, New Mexico, and California. The hope is that by 2025 such facilities might be able to power a city of six million. It's an optimistic and inspiring thought, especially for those who have persevered in this field for decades.

Found below is a list of useful resources that will illuminate and enhance understanding of the topics found within this article. The first link will take interested parties to the Built-It-Solar site. Here they will find plans and tools on how to create renewable energy projects, and there are also demonstrations of electric motors and related technologies. Moving on, the second link will take visitors to the National Renewable Energy Laboratory's page of educational resources about renewable energy. The third link leads to an excellent resource from Teachers' Domain and the NOVA television program. Here visitors can check out an interactive activity (complete with animations) that is intended to teach students about how a solar cell works and its various components. The fourth link leads to another fine resource from NOVA which includes a section on how solar panels function and a Q&A area about solar energy. The fifth link is a real find for science educators, as it includes 23 lesson plans in alternative energy created by the New York State Energy Research and Development Authority. The plans cover the efficiency of energy conversion, environmental pollution, and the photoelectric effect. The final link will lead interested parties to an energy tutorial offered by the National Fuel Cell Research Center at the University of California, Irvine.

1. Build-It-Solar: The Renewable Energy Site for Do-It-Yourselfers
This is an extensive site if you are looking for student activities and classroom projects in the area of renewable energy. It includes plans, tools, and information to do renewable energy and conservation projects. The section on design information and tools for building renewable energy projects includes some sophisticated simulations. Educational materials are given on a variety of topics such as electrical analysis including sizing of PV arrays, wire sizing, and electric motors.

2. Learning About Renewable Energy
The National Renewable Energy Laboratory (NREL) is the nation's primary laboratory for renewable energy and energy efficiency research and development and their mission is focused on advancing the U.S. Department of Energy's energy goals. As part of their mission, NREL provides educational and informational tools on their website and it is a great source of information on renewable energy basics. Topics available here include: using renewable energy, energy delivery and storage basics, advanced vehicles, fuels basics, and student resources.

3. Inside a Solar Cell
Based on a NOVA Online lesson, Teachers' Domain presents this interactive activity that provides reading material and animations to help students learn the basics of photovoltaic cells, including how a solar cell converts solar energy into electricity and the components of the unit (silicon layers, metal backing, antireflective coating, and metal conductor strips). On the site, visitors will also find a supplemental background essay, discussion questions, and standards alignment from Teachers' Domain.

4. NOVA: Saved by the Sun
This website from the Public Broadcasting Service's NOVA offers four features on solar energy. The first feature is "A new way to catch rays", and it takes a look at "six of the hottest new solar technologies." Another feature is "Inside a Solar Cell" which explains, "how a photovoltaic cell converts sunlight into electricity?" The site also provides an example of a solar house, an ask the expert section, additional links, and a teacher's guide.

5. Alternative Energy Lessons
This website has 23 lesson plans in alternative energy developed by the New York State Energy Research and Development Authority. The lesson plans include the following topics: the photoelectric effect, efficiency of energy conversion, the photoelectric effect in photocells, chemical consequences of burning fossil fuels, The Geology of Oil and Coal, environmental pollution, Where Do Plants Get Their Food?, considerations in heating a house, and many more valuable and useful classroom lessons.

6. Energy Tutorial
This energy tutorial is provided by the National Fuel Cell Research Center (NFCRC). The topics presented include fossil fuels, nuclear energy, solar energy, wind energy, geothermal, biomass, hydroelectric, energy conversion, fuel cell, combustion, gasification, and environmental impacts and trends. Each topic has some explanatory text often accompanied with images and data. There is a short quiz at the end of the tutorial.