Ecology: A world without mosquitoes
Article by Janet Fang for Nature
Synopsis and resource annotations by Max Grinnell 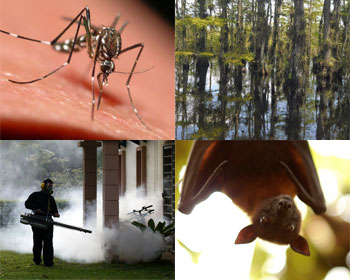 What would happen in a world without mosquitoes? It's an intriguing question for those who fight the malaria-carrying insects on a daily basis. Scientists have thought about such a scenario before, and it is a line of inquiry that is more than just conjectural. Some believe that the complete eradication of mosquitoes could have a wide range of effects in ecosystems, while other scientists maintain that things would continue on much as before.

This piece from the July 21, 2010 edition of Nature was written by reporter Janet Fang, and she investigates the potential long term serious consequences of eradicating mosquitoes. Fang begins by talking about the diseases that mosquitoes help spread, most notably malaria, which infects around 247 million people worldwide each year.

Generally, mosquitoes are considered quite pesky as well, and the piece talks about their overall nuisance factor. So what would happen if mosquitoes disappeared from the planet? For answers, Fang turns to a number of different scientists, including several entomologists.

Carlos Brisola Marcondes from the Federal University of Santa Catarina in Brazil remarks that a world without mosquitoes would be "more secure for us" and insect ecologist Steven Juliano notes that it might be "difficult to see what the downside would be to removal." However, scientists would be concerned about ecosystems of fish. Hundreds of species of fish would have to change their diet significantly, along with other animals like spiders and salamanders, should mosquitoes disappear.

The piece also notes that mosquitoes might still provide important "ecosystem services," benefits that humans derive from nature. For example, without mosquitoes many plant species would lose a group of pollinators. Of course, there is much work to be done in this area of inquiry, and this article also features a place where readers can submit their own commentary as well.

Found below is a list of useful resources that will illuminate and enhance understanding of the topics found within this article. The first link will take users to a fine page from Rutgers University that offers many details about mosquito biology. Moving on, the second link leads to a case study from the University of Pittsburgh's Department of Pathology, which provides an interesting look at the symptoms and treatment of malaria. The third link will take interested parties to a site from Texas A & M University's Department of Entomology. Here they can learn about insects' relationship with humans, agriculture, and lawns. The fourth link leads to a site dedicated to ecosystems, and will help visitors understand the role organisms play in every ecosystem. The fifth link whisks users away to the very comprehensive World Biodiversity Database, which provides taxonomic information and other materials on 200,000 taxa. The final link leads to Insects.org, which features material for educators involving various insects and a number of detailed photographs.

1. Mosquito Biology
With warm weather and summer rains comes the familiar buzz of the mosquito. This website from entomologists at Rutgers University provides a nice overview of Mosquito Biology including sections on Life Cycle, Anatomy, Habitats, and Behavior. The site also includes some New Jersey-specific sections such as A Classification System for the Life Cycles of Mosquitoes in New Jersey, a fact sheet about the Asian Tiger Mosquito in New Jersey, a Morphological Comparison of Ochlerotatus species in New Jersey, and a New Jersey Species List. The Species List contains profiles for 63 species of mosquitoes found in New Jersey, and provides information about their geographic distribution, larval habitat, larval identification, anatomical features, and more.

2. Pathology Case Study: Two Weeks in Africa
The University of Pittsburgh School of Medicine’s Department of Pathology has compiled a series of case studies to help both students and instructors. In this clinical microbiology case, a 16-year-old male developed symptoms of fatigue, diarrhea, nausea, and vomiting after returning to the United States from a two-week trip to Sudan. Laboratory test results and information from a microscopic examination are included in the case study. Clicking on the “Final Diagnosis” section will take visitors to a detailed discussion of the patient’s condition from the contributing doctor. A list of references, which students could use to get more background information, is also included at the bottom of the diagnosis.

3. Insect Answers
This webpage from Texas A&M University's Department of Entomology is a consolidated body of information on insects. Clicking on "Insect Help Publications" provides links to a number of extension service documents, with topics such as Home Gardens, Urban and Household, Medical and Veterinary, and Spanish. Other Insect Answers include information on managing pest problems, insect images and sounds, identification, and honey bees. On the right hand side of the page more information about the Entomology Department can be found as well as their bi-monthly podcast: Bug Bytes.

4. Environmental Biology: Ecosystems
This resource, from Dave McShaffrey, Professor of Biology at Marietta College, explains how energy and pollutants move through an ecosystem, how ecosystems are balanced and how they may be affected by human activities. The concepts described include the roles of organisms, food chains and food webs, pyramids of biomass, biological magnification, and biogeochemical cycles such as water, carbon, nitrogen, and phosphorous cycles.

5. World Biodiversity Database
The World Biodiversity Database, provided by ETI BioInformatics, seeks to document all presently known species (about 1.7 million) and to make this important biological information worldwide accessible. This continually growing database provides "taxonomic information, species names, synonyms, descriptions, illustrations and literature references, as well as online identification keys and interactive geographical information systems." The searchable database can be explored using an expandable tree of taxonomic kingdoms or by typing in a common or scientific name. Both educators and students should find this site easy to navigate, informative, and useful.

6. Insects.org
Billed as a site dedicated to "studying earth's most diverse organisms", Insects.org brings together amazing insect macrophotography with useful classroom resources and articles on how insects interact with humans. On the homepage, visitors can start their journey through the site by reading some of the insect profiles, "Entophiles," which include photographs and detailed descriptions. Moving on, the "Class: Insecta" section is a trove of materials for educators, as it includes activities on studying butterfly patterns and a look at insects on stamps. Visitors are also encouraged to search the website, check out the Bug of the Week, and drop the site's administrators a line via email.