On the Fringe: Astronomers look to the Kuiper belt for clues to the solar system's history
Article by Ron Cowen of Science News
Synopsis and resource annotations by Max Grinnell 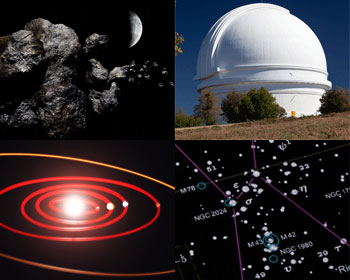 Far beyond the realm of Neptune sits the Kuiper belt, a fascinating relic of frozen, icy debris that has intrigued astronomers for decades. It was named for Gerard Kuiper, who predicted the existence of this three billion kilometer-wide swath of miscellanea and detritus in 1951. The Kuiper belt contains many curious items, including Pluto, which was reclassified as a minor planet in 2006.

This engaging article by Ron Cowen appeared in the January 16, 2010 edition of Science News, and it takes a close look at recent investigations into the Kuiper belt by astronomers around the world. The piece starts by reviewing recent work discussed at the annual meeting of the American Astronomical Society's Division for Planetary Sciences, which took place last October in Puerto Rico.

An important feature of the Kuiper belt is that many of the objects within the belt have wildly elliptical orbits and move on paths of significantly higher inclination than those that more closely follow the planets that orbit the sun. Astronomers are intimately interested in these paths, and many of those astronomers, including Hal Levison of the Southwest Research Institute, believe that these paths suggest a "close and violent encounter" with at least one of the outer planets.

The evidence of this encounter is also being used by astronomers to learn more about the early solar system. It remains to be seen exactly which one of the outer planets might have been responsible for an encounter, but a number of people, including Mike Brown of Caltech, suspect that it may have been Neptune. Work into how and when Neptune made its move into the Kuiper belt could potentially help astronomers explain how and when the planets assumed their final positions in the solar system.

The article concludes by talking a bit about the sky survey called Pan-STARRS, an attempt to count and document all objects in the Kuiper belt. This multi-year survey will be able to find items in the belt as small as about 250 kilometers across. The hope is that the survey will also help determine which objects' orbits were altered by an early interaction with the outer planets.

Found below is a list of useful resources that will illuminate and enhance understanding of the topics found within this article. The first link will take users to a NASA website that provides helpful images and articles that illuminate the nature of the Kuiper belt. The second link leads to an excellent website that contains information about the New Horizons spacecraft, which is set to visit both Pluto and the Kuiper belt in 2015. Moving on, the third link leads to a "how-to" activity which helps users build their own scale model of the solar system. The fourth link leads to the homepage of the Stanford SOLAR Center. Here educators can take advantage of lesson plans such as "Effects of the Sun on Our Planet" and "Build a Spectroscope". The fifth link will whisk users away to the homepage of the Solar System Exploration website, provided by NASA. Visitors to this website can take advantage of news coverage of space science events and an interactive timeline of robotic exploration of space. The last link leads to the National Space Science Data Center website, which contains fact sheets, images, and interactive lesson plans regarding the world of the solar system.

1. Kuiper Belt & Oort Cloud
This National Aeronautics and Space Administration (NASA) website provides information about the group of short-period comets in the Kuiper Belt. The article compares the sizes and composition of these objects to Earth and Pluto, and lists significant dates and links. Clicking on the "Gallery" tab provides visitors with telescopic images and artists' conceptions to help illustrate the site.

2. New Horizons: Mission to Pluto and the Kuiper Belt
This NASA site provides an article about New Horizons, the first spacecraft that will visit Pluto and its moon, Charon, in July 2015. The site contains video coverage of the New Horizons' launch, details on the devices aboard New Horizons that will send back first-of-its-kind images, and links to related NASA sites. Also included is an interview with the mission's Co-Investigator describing the importance of knowing more about Pluto.

3. Build a Solar System
The Exploratorium in San Francisco has offered up this rather fun and interesting activity which gives interested parties the information to build their own scale model of the solar system. Visitors can start by filling in the diameter of the Sun (which sets up the scale of their model), and the program will give them the necessary dimensions for their scale model. The site also has a list of materials that will be required, and they include a tape measure and a toilet paper roll. The activity is quite fun, and it can be enjoyed by budding astronomers of all ages.

4. Stanford SOLAR Center
The Stanford SOLAR Center is a project of the Solar Oscillations Investigation Team at Stanford and "is dedicated to sharing the joy and excitement of solar science exploration" by providing resources, activities, and projects for the classroom. Several quality educational lesson plans are provided on the site with titles such as Effects of the Sun on Our Planet, Build Your Own Spectroscope, What is Ultraviolet Light?, The Spinning Sun, Solar Math!, Magnetism and the Sun, Sunspot Races, and more. Each contains a summary of the activity, its objectives, suggested grade level, and downloadable resources, all culminating in a easy-to-use resource that would be a welcome addition to any science curriculum.

5. NASA: Solar System Exploration
This NASA website offers a wide variety of space science-related activities, multimedia, and facts for people of all ages. The website presents the latest news and upcoming space science events. Students and educators can explore space missions by name, decade, target, and nation. In the Science and Technology link, visitors can find the latest science and technology features, NASA science highlights, as well as information about astrobiology and power and propulsion. Kids will enjoy the Alien Safari interactive module and interesting facts about the planets. Teachers can easily locate activities about the science behind the latest NASA headlines through the Fast Lesson Finder. Everyone can view the images and videos of the planets, spacecraft, technology, and additional subjects.

6. Lunar and Planetary Science at the National Space Science Data Center
The National Space Science Data Center (NSSDC) archives and distributes "planetary and lunar data and images obtained from spacecraft missions (both NASA and non-NASA)." Users can find fact sheets, images, and other resources for the nine planets in the solar system as well as for asteroids and comets. Clicking on "Image Resources" under the "Data Services" heading will take visitors to a trove of images. The NASA's Discovery Program link, found in the bottom right corner, describes two new missions, Dawn and Kepler, along with eight previous missions. The website supplies answers to common questions about the navigation of the site and also provides links to educator resources.