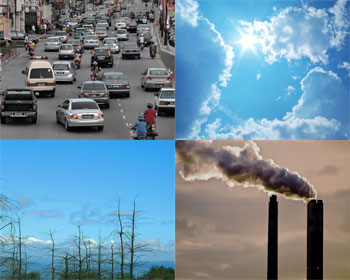 In 1952, a massive smog bank settled over London and it was responsible for approximately 12,000 deaths during the coming months. It served as a wake-up call to Britons, and four years later the United Kingdom passed a set of broad air pollution regulations. The United States followed suit in 1970 when the federal government created the Environmental Protection Agency (EPA) and also passed the Clean Air Act.

There remains much to be done in terms of air quality in the United States, and this article by Brian Vastag for the Smithsonian magazine website takes a close look at the future of regulating indoor air quality and the concentrations of ozone throughout the country.

The piece begins with a brief history of air pollution regulation in the US, and then begins to offer some perspective on how the EPA has modified its standards over the past several decades. In recent years, there has been a great push from citizens groups and others to work on issues including radon and indoor smoking bans.

The article goes on to describe particulate pollution and the "Six Cities" study done by Harvard University, which was begun in the early 1970s. That research determined that the study area with the fewest particles (Portage, Wisconsin) had 26 percent fewer deaths from lung and heart diseases than Steubenville, Ohio, which had the dirtiest air. As a result of this study, the EPA tightened its regulations on particulate pollution in 1997, and the agency began regulating particles as small as 2.5 microns across.

Vastag concludes the article discussing the challenges involved with lowering the concentrations of ozone, which forms when sunlight reacts with various pollutants. The EPA tightened its ozone limit in 2008, and an even more restrictive standard is currently on the table. Of course, there is also the question of greenhouse gases, and in 2009, the EPA declared them to be dangers to human health. While the EPA does not regulate emissions of these gases, the agency has recommended that Congress pass comprehensive climate change legislation.

Found below is a list of useful resources that will illuminate and enhance understanding of the topics found within this article. The first link leads to "An Introduction to Indoor Air Quality", provided by the EPA. The second link will take interested parties to a case based lesson plan from the BioQUEST Curriculum Consortium. Here users will find a lesson plan that has students generating maps of ozone concentrations, graphing air quality indices, and proposing solutions to air quality problems. The third link leads to a travel emissions calculator that can be used to determine emissions from a variety of transportation methods. Moving on, the fourth link leads to a lesson plan created by the National Park Service to introduce students to the world of air quality issues. The fifth link leads to another resource created by the EPA that allows users to determine how clean their electricity source (or sources) might be. Finally, the last link leads to an activity that helps students determine the total nitrogen oxide emissions from sources that include coal-fired power plants and gas-powered lawnmowers.

1. Sources of Indoor Air Pollution
There are three basic strategies to improve indoor air quality: source control, improved ventilation, and air cleaners. This site offers the reader some insights to improving air quality through increased ventilation, air cleaners for particle removal, and other common-sense methods that may be employed. Many times the quality of the air in our homes and public or office buildings is marginal at best. The sources of indoor pollution may be outside of our ability to rectify or it may be as simple as adjusting the flame on our furnace or kitchen stove or maybe something as simple as opening a door or window. However, in many instances we have no control over the air quality because of the materials used in the construction of the building.

2. The Sky is Falling: A Module for Investigative Case Based Learning in the Classroom
In this case-based module from the BioQUEST Curriculum Consortium, students will generate maps of ozone concentrations, graph air quality indices, and propose solutions to problems with the ozone and air quality, specifically smog. This unit addresses Earth Science, Environmental Science, Meteorology, Math, and Process Skills. The lesson includes learning objectives, outside resource links, the investigative activity, and assessment guidelines.

3. Travel Matters Emissions Calculator
This site, from the Center for Neighborhood Technology, houses a calculator that allows individuals and transit authorities to determine how various modes of transportation contribute to carbon dioxide emissions and global warming and global climate change.

4. Acid Rain Lesson Plan
This lesson plan was provided by the National Park Service Air Resources Division and prepared as a part of The Uplands Field Research Laboratory, Volunteer in Parks, and Interpretation of Science Project. The site includes lesson goals, background information (including the Definition of Acid Rain, Sources of Acid Rain, and Pollution Control Measures), and five coordinating lessons. There are also figures provided to go along with the activities to further illustrate the lesson.

5. How Clean is the Electricity I Use?
This site from the EPA provides a useful Energy Pollution Calculator which will help students and other interested persons calculate the greenhouse gases and other pollutants created from the energy they consume. The calculator determines users' power grid region based on ZIP code and electric utility, compares the fuel mix and air emissions rates of the electricity in users' region to the national average, and determines the air emissions impacts of electricity use in users' home or business. The calculator is a handy tool and very easy to use.

6. Nitrogen Oxide Calculator
In this activity, students will analyze their nitrogen oxide emissions from all sources (including coal-fired power plants, natural gas combustion, gas-powered lawnmowers, etc.) and combine them with vehicle emissions calculated in the previous activity (Ground-level Ozone: Your Vehicle) to derive an estimate of total emissions of smog-forming NOx. They will use an online nitrogen calculator and enter values for private transportation, public transportation, heat and power, and number of people living the household to receive the total emissions figure.