The larger world of nano
Article by Cyrus C.M. Mody from Physics Today
Synopsis and resource annotations by Max Grinnell 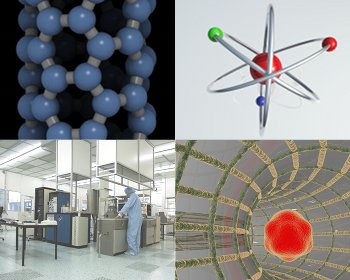 While certain researchers and scientists may be well-versed in what nanotechnology is, many others may only have a vague idea. At its essence, nanotechnology is the study of the controlling of matter on an atomic and molecular scale. The potential applications for nanotechnology are tremendous, including new advances in medicine, manufacturing, and even as a source of environmentally-friendly energy production. There is, of course, concern in some quarters about the development and expansion of nanotechnology and its applications. Is it safe? What are the potential ethical issues? Are there potential public health and safety concerns?

These are but a few of the questions discussed by history professor Cyrus C.M. Mody of Rice University in this piece from the October 2008 issue of Physics Today. Professor Mody is primarily interested in how research across other academic fields, such as the social sciences and humanities, can help different stakeholders understand the world of nanotechnology and also make it "more transparent to an enthusiastic but cautious public."

Mody's piece begins with a brief discussion about the emergence of the field of ethical, legal, and social issues (ELSI) in nanotechnology. The piece continues by discussing the importance of funding for ELSI across the board, and also mentions that research projects on the societal dimensions of nanotechnology can aid the cause of garnering public support for increased funding for such initiatives.

Mody addresses the concerns of researchers looking into general attitudes surrounding nanotechnology. One piece of research done by Maria Powell at the University of Wisconsin-Madison's Nanoscale Science and Engineering Center seems to indicate that most scientists she interviewed seemed quite concerned that nanotechnology was suffering from a bit of an image problem in the media and by the public at large. Additionally, Powell found that many scientists she interviewed weren't aware of any current evaluations of the potential risks of various types of nanotechnology, such as nanotoxicology.

In his final remarks, Mody makes an argument that bringing in qualitative analysis can help explore the societal dimensions of nanotechnology. Specifically, he mentions the inherent possibilities of "scenario development". Essentially this entails writing stories that describe future scenarios for the use of different nanotechnologies and the ways that these technologies will influence society over the long term.

Found below is a list of useful resources that will illuminate and enhance understanding of the topics found within this article. The first link will take users to the National Institutes of Health "Nanotechnology at NIH" site. Here visitors can learn about the Institute's work on nanotechnology, and view a number of their publications. The second link leads to the website of the Center for Nanotechnology Education and Utilization (CNEU) at Pennsylvania State University. The site contains helpful panel discussion videos on education opportunities in nanotechnology and career choices in this emerging field. Moving on, the third link leads to the National Nanotechnology Infrastructure Network (NNIN) homepage, which includes educational activities on the relative size of nanostructures. The fourth link will take users to an excellent presentation by Professor Sandip Tiwari titled simply "What is nanotechnology?" The fifth link leads to the very helpful open textbook on nanotechnology created by the University of Minnesota's Center for Nanostructure Applications. And finally, the sixth link leads to a nice primer on how scientists effectively see nanostructures, which can be as small as 1/1000th the diameter of a human hair.

1. National Institues of Health: Nanotechnology
Visitors who are wondering what nanotechnology is and what it can be used for, will find this website from the National Institutes of Health very helpful. If visitors have wondered what a nano looks like they can check out the video on the right side of the homepage for a 30-second animated view comparing the size of a nano to everyday objects. To learn more about the use of nanotechnology in the area of medical research, visitors should click on the link to the PDF "Innovative Medical Research at the Molecular Scale", which is located near the middle of the page. The twelve-page document briefly highlights some of the areas of research being conducted around the country, and page eight has a list of online Nanotechnology Resources that address the regulations and potential concerns of the use of nanotechnology. If, after a thorough examination, a deeper understanding of nanotechnology is desired, visitors are provided with links to further research by clicking on "Learn more about Nanotechnology at NIH".

4. What is Nanotechnology?
Presented by Professor Sandip Tiwari, this hour-long introductory presentation covers the basic fundamentals of nanotechnology. With sound, video, and slides, this presentation begins by discussing the definition of science, and moves to understanding the scale of nanostructures, what is new about nanotechnology, quantum mechanical effects, the atomic view, classical charge effect, nano-magnetics, carbon nanotubes, photonic and optic properties, and self-assembly, and many other topics. It is an excellent introductory lecture for students new to nanotechnology and its applications.

5. Nanotechnology: An Open Textbook
Published by the Center for Nanostructure Applications at the University of Minnesota, this open textbook by a variety of educators introduces nanotechnology techniques and materials. The text is a work in progress, and not all chapters or subchapters have been completed, but still there is plenty of information here to make the textbook worthwhile. Visitors will find sections about biochemistry, advanced lithography, nanobiosystems, and molecular devices. It’s an excellent, and freely available, addition to any nanotechnology, applied physics, or materials engineering classroom.

6. Seeing Nanostructures
Nanotechnology is an emerging field of engineering, but the small structure of the technology makes it intimidating for many. This website, hosted by The National Infrastructure Network, allows users to “see” nanotechnology. It more specifically addresses three questions; they are: “Why would we want to make or study such small things? How would we make such small things? How would we see these nanostructures?” Besides simply addressing these questions, the website also examines different instruments used in viewing and creation of nanotechnology. The items featured are: optical (light) microscopes, electron microscopes, and scanning probe microscopes (SPM). Altogether, the site is a good survey of many different aspects of nanotechnology.