This month's AMSER Science Reader Monthly topic is the prevention of tropical disease and the use of forensic science. 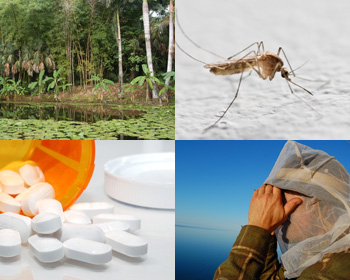 Although it is extremely infectious, malaria is a disease that is relatively easy to cure. Easy, that is, if the anti-malaria drugs received are the real thing. But what if the cure is a complete counterfeit? Andrew Marshall, in an article from the October 2009 issue of Smithsonian Magazine , recently set off on a mission to Southeast Asia to investigate what scientists, government officials, and others are doing to combat the growing problem of counterfeit anti-malaria drugs.

One of the people fighting back against the trade and manufacture of these counterfeit anti-malaria drugs is forensic scientist and government official Ouk Vichea, who works out of an office in the Cambodian city of Battambang. Part of Vichea's work involves performing tests on small packs of medicine which claim to be artesunate, which is a powerful compound used to treat malaria. Vichea and his counterparts throughout Southeast Asia face an uphill battle, as a recent research study reported that the volume of fake pills has risen steadily.

Many opt to save money by buying the cheapest antimalarial drugs they can find, and as a result, it is more likely that they will receive some type of bogus medicine, like flour. It is hard to gauge the extent of the problem precisely, but the World Health Organization (WHO) estimates that up to 20 percent of the one million malaria deaths each year can be attributed to counterfeit drugs. As the problem becomes more widespread, new methods to combat the counterfeiters have been introduced. Drug companies have attempted to authenticate their medication by adding batch numbers and holograms to their packaging. But counterfeiters are quick to catch on, and now the bogus medications can be found with imitation holograms. In 2005, public health officials, researchers, and the World Health Organization (WHO) agreed to join forces with the International Criminal Police Organization (Interpol). This project, called the Jupiter Operation, draws on experts from a wide variety of fields to try and gather enough evidence to put the counterfeiters behind bars. Using chemical, mineralogical, biological, and packaging analysis testing, "a picture of where many of these counterfeits were coming from began to emerge."

Found below is a list of useful resources that will illuminate and enhance understanding of several of the topics explored within this piece. The first three links will lead to resources for students and educators that address various aspects of tropical disease, with a focus on malaria. The next three links lead to educational materials related to the study of forensic science.

The first entry leads to a page from the World Heath Organization (WHO) on tropical disease research, where visitors will find information on current research, grants, and publications. The second entry will take visitors to the Smithsonian Tropical Research Institute's webpage where they can learn about the institute's diverse research projects, international activities (such as the Center for Tropical Forest Science), and fellowship opportunities. The third entry leads to health tutorials from Medline Plus and the National Library of Medicine. Here, visitors will find information on the causes, symptoms, diagnosis, and treatment for malaria as well as prevention tips. The fourth entry leads to an online forensic chemistry lab manual created by Professor Robert Thompson of Oberlin College. The fifth entry leads to a website from the Virtual Museum of Canada designed for anyone with "an interest in the different scientific methods used to solve crimes." The final entry will take visitors to the Human Genome Project's Information: DNA Forensics website which is coordinated by the Department of Energy and the National Institutes of Health. The site is full of valuable and interesting information including a number of fascinating case studies. Overall, these resources should provide greater scope and help contextualize the ideas and concepts found within the featured work. The list provides links to resource records in the Applied Math and Science Education Repository (http://www.amser.org).
1. Tropical Disease Research Programme
Tropical diseases are a serious business, particularly in the developing world, so it's good to know that the World Health Organization has had an independent scientific research group working in this area since 1975. From their homepage, visitors will find sections titled "Research Results", "Grants", and "Publications". Visitors who may not be familiar with WHO's work will want to look over the "Headlines News" area, as it brings together news features on river blindness, malaria eradication, and community-led public health initiatives. The "Research Results" area is a fine way to learn more about the organization's work over the past decade, and the "Publications" area contains working papers organized by year and over two dozen valuable training aids. Additionally, visitors looking for material related to a specific tropical disease can click directly on visual icons representing malaria, leprosy, dengue, and chagas disease.

2. Smithsonian Tropical Research Institute
Most visitors to the Smithsonian Institution's museums in Washington, DC may not be aware of the activities of their Tropical Research Institute, which may have something to do with the fact that it is located in Panama. The Institute's history stretches back to the early years of the 20th century, when one of its prime directives was to survey the flora and fauna of the area for the purpose of controlling diseases such as yellow fever and malaria. In 1946, the Institute came into the fold of the Smithsonian Institution, and since then it has conducted research in the areas of archaeology, behavioral ecology, environmental monitoring, and other topics. On the site, visitors can learn about the institute's diverse research projects, international activities (such as the Center for Tropical Forest Science), and fellowship opportunities. Finally, visitors can also look at the two webcams operated by the Institute, including one that looks over the island (Barro Colorado) where they are located off the coast of Panama.

3. Malaria
This health education program discusses malaria including the causes, symptoms, diagnosis, and treatment. It also provides prevention tips for those traveling to countries where malaria is common. This resource is a Medline Plus Interactive Health Tutorial from the National Library of Medicine, designed and developed by the Patient Education Institute. NOTE: This tutorial requires a special Flash plug-in, version 4 or above. If you do not have Flash, you will be prompted to obtain a free download of the software before you start the tutorial. You will also need an Acrobat Reader, also available as a free download, in order to view the Reference Summary.

4. Forensic Chemistry Lab Manual
Any aspect of forensic science can be quite tricky, and educators will be delighted to learn about this helpful educational resource designed just for them. Created by Professor Robert Thompson of Oberlin College this online forensic chemistry lab manual is designed to help chemistry faculty in developing forensic chemistry project laboratories for both undergraduate and graduate courses. In this manual, visitors will find sample preparations, procedural details, instructions for students, and typical results in a variety of formats. Along the left-hand side of the homepage, visitors can look through the forensic chemistry analyses, which include explosives, fabric, glass, and arson. The site is rounded out by a selection of "Stories", which are meant to provide the background for chemical analyses of crime scene samples.

5. Interactive Investigator
Interactive Investigator, available through Virtual Museum Canada, is a website "for anyone with an interest in the different scientific methods used to solve crimes." Users will find a database of forensic science, containing short but informative essays on forensic entomology, toxicology, alcohol analysis, and various other forensic science topics. A simple timeline reviews key dates in the development of forensics, starting with the creation of the Paris Institute for Forensic Science in 1868. But the main feature (and the most fun) is an interactive game, in which players collect and analyze crime scene clues to solve a murder case. Interactive Investigator is also available in French.

6. Human Genome Project Information: DNA Forensics
A detailed introduction to DNA forensic identification can be found on this website, provided by the US Human Genome Project (coordinated by the Department of Energy and the National Institutes of Health). The site includes descriptions about of/or links to a number of fascinating case studies, such as proving the son of executed French King Louis XVI and Marie Antoinette did indeed die as a child in prison, and testing claims that African Lemba tribesmen are directly descended from the ancient tribes of Israel.