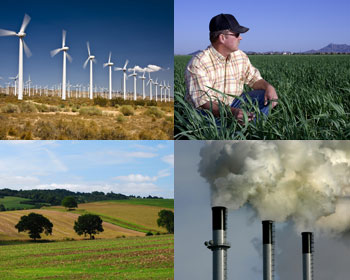 In 1997, 182 nations signed the Kyoto Protocol, which effectively mandated the curbing of carbon emissions. Of course, one rather thorny matter was that the United States (a major contributor to carbon emissions), never ratified the Protocol. While many countries in the developed world were concerned about the effect of greenhouses gases on the environment, many countries in the developing world were also concerned about the effect that limiting carbon emissions would have on their economic future.

As Jennifer Barone reports in the December 2008 issue of Discover Magazine, part of the solution was to create a carbon market. Essentially, national governments set a cap limiting the total amount of greenhouse gases that industries can emit, and then those industries that wish to emit more (or less) can buy or sell these carbon emissions permits on the open market. This allows those in the developing world to purchase permits or offsets for their carbon emissions. Despite the fact that the U.S. did not ratify the Kyoto Protocol, the cap and trade system created as a result of the Protocol has its roots in the U.S Clean Air Act, which was remarkably successful in reducing the pollution that causes acid rain. However, as Barone reports, replicating this success internationally has not been as simple.

The article points out a number of key problems with the cap and trade system, including the differences in pollution regulation in the United States, Europe, and China. Barone explains that quantifying carbon emissions is often difficult and inaccurate. In the U.S., power plants are required to install instruments under the Clean Air Act and record their acid rain-causing emissions to the Environmental Protection Agency, while industries in Europe are not required to use any monitoring instrumentation. Thus, European industries are essentially responsible for their own carbon accounting. As Larry Lohmann, a researcher with the U.K.-based nonprofit the Corner House points out, "The margin of error for what's coming out of the stacks is way too wide to say whether emitters are in compliance with regulations. And when it's left up to the companies to do the reporting, they have a huge amount of discretion in saying how much they're emitting." Additional issues exist with regulating carbon emissions, including the validity and regulation of carbon offsets. Despite the complications with the cap and trade system and carbon offsets, Barone explains that most governments and researchers still believe that the shortcomings are not enough to stop making the laws governing greenhouse gases worth enacting.

Found below is a list of helpful resources that can help explain and enhance understanding of the comprehensive and complicated topics found within this article. The first link will help users better understand the concept of cap-and-trade programs with a working paper that discusses successful arrangements in reducing pollution in the United States. Both the second and third links provide a global perspective on pollution control by discussing how businesses and other institutions are attempting to cope with the effects of climate change. The fourth link leads to an activity that allows users to calculate how their daily lives impact the environment. This resource will help users not only calculate their carbon footprint, but it will also suggest helpful ways in reducing their impact. Moving on, the fifth link discusses the European Union's efforts to fight climate change and promote renewable energy resources and includes fact sheets and working documents by European Commission staff members. Finally, the last link will better explain how pollution affects atmospheric chemistry. The lesson examines indoor, point, and non-point pollution sources and allows users to find information about industrial polluters in their communities. Overall, these resources should provide greater scope and help contextualize the ideas and concepts found within in the featured work. The list provides links to resource records in the Applied Math and Science Education Repository (http://amser.org).

1. Are Cap-and-Trade Programs more Environmentally Effective than Conventional Regulation?
This working paper, created by Denny A. Ellerman of the Massachusetts Institute of Technology, examines the issues associated with cap-and-trade programs. The paper focuses on whether these arrangements have been successful in pollution reduction in the United States. The article provides background on the policies of U.S. cap-and-trade programs and provides a policy analysis of the effectiveness of these programs.

2. Business and Sustainable Development: A Global Guide
This site, created by International Institute for Sustainable Development, helps explain the strategies that companies can use to pursue sustainable business practices. The page includes case studies, green products and markets for these items, banking and investment, and partnerships with nonprofit organizations. A list of published resources is also provided for the interest of the business community.

3. Global Climate Change: Economics, Science, and Policy
A part of Massachusetts Institute of Technology's Open Course Ware initiative, this resource discusses the possible impact global warming will have on various institutions. MIT's Sloan School of Management has created this course drawing on the University's joint program researching the science and policy of global climate change. The resource includes lecture notes, several assignments, and suggested readings. Users can get a sense of the basic objectives of the course by looking over readings and lectures notes provided.

4. Carbon Dioxide Calculator
This exercise will allow students to calculate how much carbon dioxide they are responsible for emitting through their daily activities. This "Personal Greenhouse Gas Calculator" was developed by the U.S. Environmental Protection Agency and is implemented into this lesson plan by author John Pratte of Kennesaw State University. The calculator coupled with the lesson plan allows users to see how lifestyle changes could reduce carbon dioxide output. Links to external websites are provides for additional information on the topic.

5. Climate Action: Energy for a Changing World
This resource discusses the European Union's initiative to help fight climate change and promote renewable energy. EU member nations are implementing these programs in an attempt to reduce greenhouse gases by twenty-percent and increase their renewable energy consumption by the same amount by 2010. The page serves as a clearinghouse for all information related to this ambitious project. Users can find fact sheets for each country involved and work documents by European Commission staff members. The site is available in all the languages of the European Union.

6. How Humans Change the Atmosphere
This exercise is designed to introduce the concept that human activities can profoundly alter the chemistry and gaseous composition of the atmosphere. These changes can have a variety of impacts on human and environmental health. Discussion topics include indoor, point and non-point pollution. Students will use resources provided by the Environmental Protection Agency (EPA) to research industrial polluters in their local areas. These tools will help them generate names, addresses, and potential environmental concerns to generate maps showing the location of pollution. The lesson will help uncover information about pollution sources on a local level.

AMSER Science Reader Monthly is developed by Internet Scout at the University of Wisconsin-Madison in conjunction with the National Science Digital Library with funding from the National Science Foundation. If you have questions or suggestions please e-mail us at info@amser.org.